Norway’s first commercial solar power plant, which is banking on cost savings through 1500 Volt technology, is currently being built on a cold storage facility. The roof-mounted system will have an output of two megawatts. KACO new energy has been tasked to deliver its new blueplanet 92.0 TL3 inverter. The model belongs to an inverter generation that uses novel silicon carbide semiconductor technology. 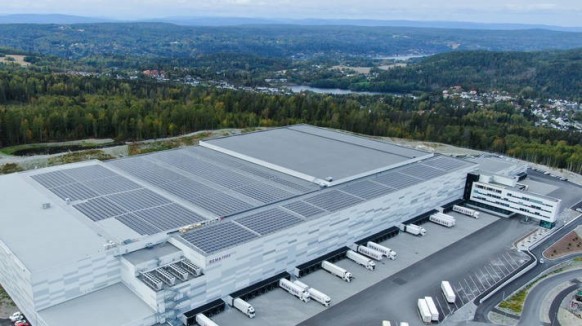 Germany-based KACO new energy GmbH has just delivered 22 units of the blueplanet 92.0 TL3 to Norway. The inverters are intended for the PV system on the roof of a cold storage facility in Vinterbro, south of Oslo, which is used by the supermarket chain Rema 1000. The solar power plant has a capacity of two megawatts.

It is Norway’s first commercial solar roof project using 1500 Volt technology. In addition to the inverters, the PV specialist from Neckarsulm also supplied the matching DC combiners. These have already been installed by the executing company, Solcellespesialisten from Fredrikstad. Completion of the entire system is scheduled for the end of 2019.

Significant cost reduction in prospect
Longer module strings can be formed using PV modules, cables and inverters designed for the higher voltage of 1500 Volt. This means less wiring and less work for the electricians compared to the usual 1000 Volt. Bjørn Thorud of Multiconsult, the planning agency responsible, estimates that using the 1500 Volt inverter from KACO new energy will reduce costs by ten to 15 percent.

Extreme weather taken into account
The blueplanet 92.0 TL3 can be installed outdoors – and produces its full power in a wide temperature range from -25 °C to over +50 °C. This prepares the inverter for Norway’s icy winters and for high temperatures on the roof in summer.

The performance at high temperatures is due to semiconductor modules made of silicon carbide (SiC). At the end of last year, KACO new energy was the first manufacturer in the industry to introduce this kind of SiC modules in serial production. The first model in this series, blueplanet 125 TL3, was recently installed in a 5-megawatt solar park in Turkey.