The solar panels developed by startup Insolight boast an impressive 29% yield – a record for the retail market. These systems, which have now been standardized for mass production, contain lenses that focus sunlight on tiny high-yield photovoltaic cells, employing what is a pioneering approach for the solar-power industry.

All rooftop solar panels look pretty much the same from the outside: same size, same thickness and even the same installation system. But on the inside, the solar panels developed by EPFL spin-off Insolight stand apart. They deliver yields of 29% – nearly twice as much as the others currently on the market (which have yields of 17–19% ). Insolight’s panels, which were recently tested by an independent lab, use a patented optical system that concentrates sunlight on a kind of miniature photovoltaic cell normally used in satellites

Boosting efficiency while keeping a lid on costs

Studies have shown that the average yield on commercial solar panels has increased by just 3.5 percentage points since the 2000s and seemed to be reaching a plateau. But Insolight’s three founders – Mathieu Ackermann, Laurent Coulot and Florian Gerlich – wanted to push yields further and decided to try something radically different: build residential solar panels that employ the same kinds of cells used in satellites, which are very efficient but also very expensive. To keep costs down for the retail market, the three EPFL’s School of Engineering alumni developed a protective glass on which optical lenses can be placed that concentrate sunlight by some 100x and direct it to the tiny surface of the high-performance cells. That means the cells need to take up less than 0.5% of the solar panel surface. The founders also designed a mechanism that can move the cells horizontally by a few millimeters each way in order to follow sunlight throughout the day. 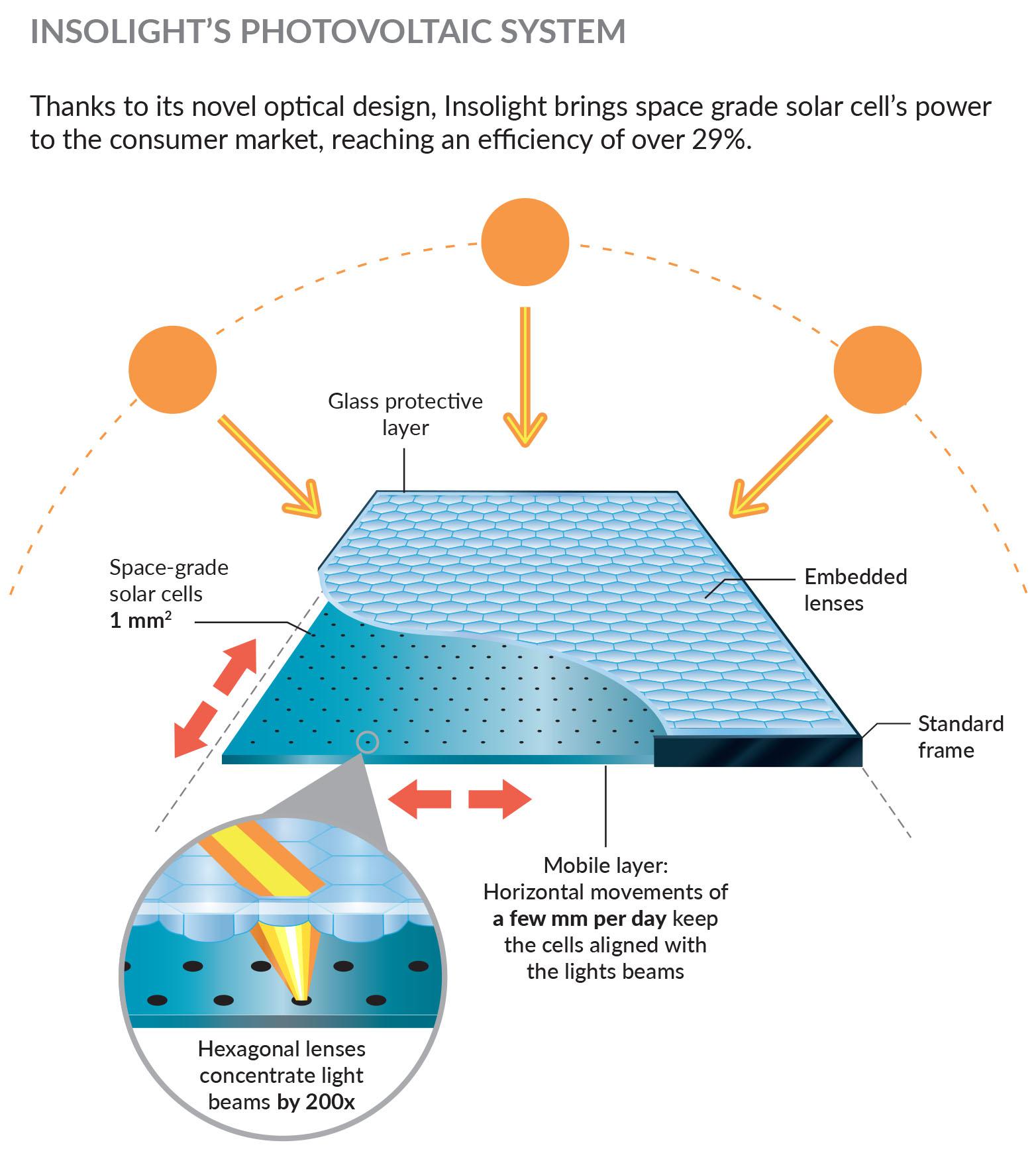 Because the cells occupy just a tiny fraction of the solar panel surface, Insolight’s system can even be installed on top of conventional solar panels to boost their yields. “This hybrid approach is particularly effective when it’s cloudy and the sunlight is less concentrated, since it can keep generating power even under diffuse light rays,” says Ackermann, Insolight’s CTO.

The ultra-thin system has the same look and shape as regular rooftop panels and can be installed in the same way. “The real challenge for the retail market is to increase yields without pushing costs too high, while keeping the equipment both robust and easy to install,” says Coulot, the firm’s CEO.

Insolight’s technology first set a record in lab tests two years ago, when it achieved a yield of 36%. The system has since been standardized for mass production with a 29% yield – far ahead of competitors’ 17–19% yield – as confirmed in tests by the Institute of Solar Energy at the Technical University of Madrid (IES-UPM).

The system was also tested for a full year on rooftops at an EPFL pilot site. “Our panels were hooked up to the grid and monitored continually. They kept working without a hitch through heat waves, storms and winter weather,” says Ackermann proudly.

According to the founders, Insolight’s solar panels offer a better return on investment than competing solutions. “Our technology can cut household energy bills by up to 30% in sunny regions,” says Coulot. This calculation – performed according to standard industry practice – factors in the panels’ cost, useful life and yield, as well as local power costs, weather conditions, borrowing costs, and maintenance and cleaning costs.

The firm’s three founders met at EPFL and established their company at the school’s Innovation Park. Today they are in talks with several solar panel manufacturers to license their technology. “Making our panels entails a few additional steps during the assembly stage. These steps could be tacked on to the end of standard production processes,” says Coulot. The company plans to launch its first product on the market in 2022.