Producing more solar power in wintertime thanks to snow

Installing photovoltaic panels in high mountains could significantly reduce the power deficit experienced by this renewable energy in winter, according to a joint study by the WSL Institute for Snow and Avalanche Research SLF and EPFL. 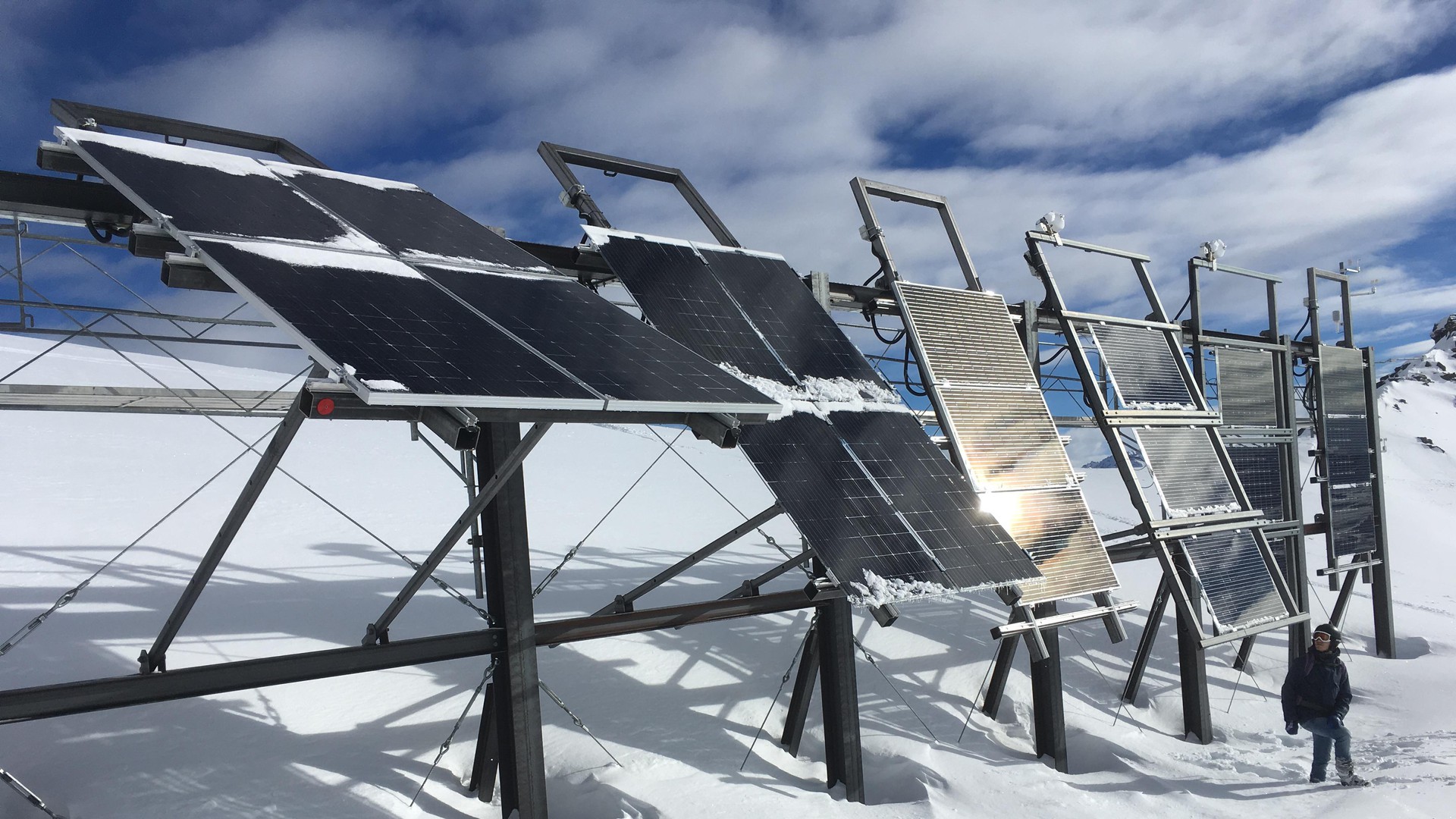 The Swiss Energy Strategy 2050 reflects the decision to abandon nuclear power in the medium term. In the coming decades the reduction in the amount of available electricity will need to be made good successively by power generated from other resources. In order to avoid the additional burden on the climate that increased carbon dioxide emissions would entail, the principal candidates are renewables, namely solar and geothermal energy, and wind.

The amount of electricity generated by solar energy in particular is subject to substantial seasonal fluctuations. As a general rule, in summertime PV systems generate more electricity than is needed by the market. In winter, on the other hand, a supply shortfall arises because of reduced solar radiation. There are fewer daylight hours, the sun is lower in the sky, and fog and low stratus cloud frequently impede sunshine at low altitudes in particular. In order to overcome the disparity between supply and demand, electricity produced in the summer needs to be stored for available use in wintertime. This is currently feasible on a large scale only in pumped storage power stations, but available capacities are lacking. Furthermore, this solution entails high energy wastage. For that reason, it would make better sense to generate greater amounts of solar power in winter.

In a study published recently in the leading scientific journal Proceedings of the National Academy of Sciences (PNAS), Annelen Kahl and her colleagues in the snow processes research group of the WSL Institute for Snow and Avalanche Research SLF and the Laboratory of Cryospheric Sciences (CRYOS), which is affiliated to EPFL, examine whether more electrical energy could be produced in wintertime in particular by installing PV systems not on the Swiss plateau, but in high Alpine regions. Among the resources they utilised to answer this question were data captured by remote sensing satellites, which provide an estimate of solar radiation reaching the ground across the whole of Switzerland. On this basis the researchers calculated the potential for generating electricity with PV systems. This investigation now shows that PV systems installed in high Alpine regions can significantly reduce the seasonal supply shortfall in wintertime because the amount of solar radiation in winter is greater there than on the Swiss Plateau, which is often shrouded in fog.

The researchers also investigated the influence exerted by the snow-covered ground and the inclination of installed solar panels on the amount of electricity generated. Kahl explains, “When PV systems are installed in the mountains, solar radiation reflected by the snow can be used additionally to produce electricity.” According to the study, this reflected radiation is exploited most efficiently when the solar panels are installed at a steep angle. Taking this action can further increase the amount of electricity generated in wintertime. “Our study shows that PV systems in the mountains, compared with installations on the roofs of buildings in the Swiss Plateau, are much more capable of overcoming the supply shortfall that will arise as a consequence of abandoning nuclear power because, per square metre, solar panels at high altitudes produce electricity not only in larger quantities, but also when it is needed,” adds Kahl.

With the aid of an experimental system on the Totalp in the Parsenn ski resort above Davos, the SLF and EPFL, together with the utility company that supplies the canton of Zurich (EKZ) and the Zurich University of Applied Sciences (ZHAW), are currently examining technical and practical issues arising from the installation of PV systems in the mountains, including the angle at which the panels have to be mounted so that deposited snow slides off by itself.